In a post of no less than 250 words, share you thoughts on overfishing, including what it is, whether or not pollock are or were overfished, and the evidence that supports your stance. You might find it useful to think of geographical scale in your response.

Billion Dollar Fish is full of colorful characters. In a post of at least 250 words, tell the class who your favorite character is from your reading of Billion Dollar Fish and why? What makes them your favorite and be sure to tell us how they fit into the story of Alaska Pollock. Share with us by 11:59 PM on November 8. By 11:59 by on November 9, please comment on at least two posts by your peers.

In the opening sections of Billion Dollar Fish there are some immediate similarities and differences to the northern cod story of Newfoundland. What strikes you as similar? What is different?

Provide a brief definition or short description of the following terms, dates, or historical figures:

Species: Answers may vary, need to be clear that species are defined based on reproductive isolation; species and freely breed within, but are isolated from other such groups (reproductively, geographically, etc)

Phenotypic plasticity: Changes in traits that are the result of the environment and not genetic-based evolution. Think barnacles in exposed vs. sheltered coves.

Thomas Malthus: Cleric, author, and major influence of Darwin. Wrote that species can grow faster than their resources- an argument used to justify terrible things

Natural selection: Process that was identified by Darwin to lead to evolution and local adaptation. In class/on quiz we discussed three premises/steps of the process

July 2, 1992: A terrible day in Newfoundland; start of the on-going northern cod moratorium.

Primary production: The base of the food chain, photosynthesis production by organisms such as phytoplankton

the following graph that shows a surplus production curve from a hypothetical population of fish. Interpret the graph by responding to the following questions:

To maximize employment you would want to be fishing harder than you need to be, and thus you would be on the LEFT side of the curve closer to 0 stock biomass. This scenario is overfishing the stock, not underfishing, but it’s still ‘sustainable’ because this is a surplus production curve.

Problems arise when we think of maximum sustainable yield as a constant quantity; and it is impossible to really know what the MSY is until we have gone past it! And there is nothing harder to do in fisheries management than reduce effort as this puts people out of work and is never an easy political decision.

While tide pooling along your favorite beach, you notice that the spines on the surf perch (family Embiotocidae) that inhabit the pools seems to vary. In the big pools the surf perch appear to have really large and dramatic spines, whereas the perch in the small pools have small and inconspicuous spines. Given that you know that spines are a defense against predators, provide a testable hypothesis for the patterns of spine size you observed, assuming that spine size is phenotypically plastic. Briefly describe how you might test your hypothesis.

Answers vary. I wanted to see a clear understanding that you could test for plasticity by modifying the environments of the perch and quantifying spine size within a generation (or life time of a perch).

The graph below is the result of an experiment where perch from your favorite beach were collected and reared in the presence or absence of predators. What does this tell you about your hypothesis regarding spine size? Is it consistent with phenotypic plasticity? Why or why not? 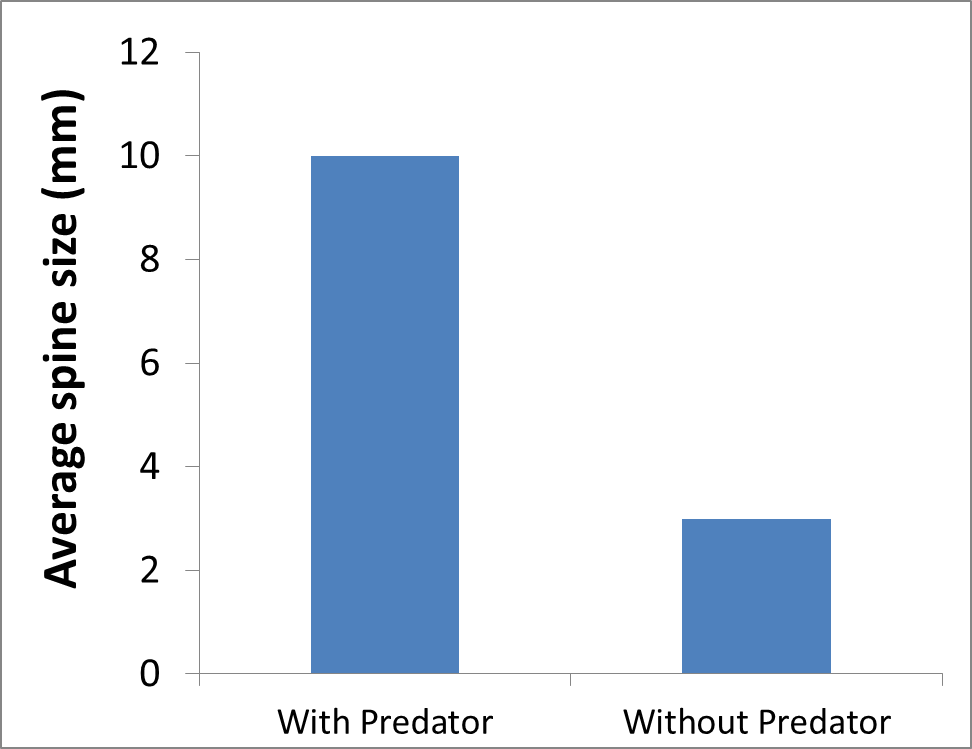 This is similar to the pattern we saw in class where carp grown in the presence or absence of pike have radically different body shapes. This is classic phenotypic plasticity.

Pick and choose! Answer two (2) of the following 3 questions.

People either got this or they didn’t. The food web was a big hint. The number of trophic transfers and the efficiency of those transfers are the two factors that determine production and potential harvest in an ecosystem.

Most people got this one. Greenberg saw the protected traditional and customary use of salmon as barter. Trading is common and legal and a way that many rural economies roll.

McEvoy and Solow discussed sustainability and had considerations for future generations, but McEvoy was focused on maintaining the health of the relationships between the ecosystem, the economy, and systems of governance. In contrast Solow defined sustainability as future generations being at least as well off as we were; which at best is a vague concept. He focused his argument on the role of substitutes, which would have largely violated McEvoy’s definition.

Thanksgiving is coming! Picture yourself chatting with a relative, who asks about what you’ve learned this term. Your conversation turns to northern cod of Newfoundland and they want to hear the whole tale. In your own words, tell the story of the rise and fall of northern cod, being sure to emphasize the causes and consequences of the collapse.

The grading rubric was simple on this one:

30 points for answers that were logically organized, thoroughly detailed with both the history leading to the moratorium and the causes of the collapse, as well as detailed describing the cultural and other (e.g. environmental) consequences of the collapse. Well written with few or no spelling errors or grammatical errors.

25 points for answers that were mostly organized, had few details (though some may have been incorrect) about the history and causes of the collapse, and consequences. Some spelling errors and grammatical errors.

20 points for answers that were too vague on details and not developed or logically organized. Spelling errors and grammatical errors common.

We are now finished with Four Fish and it is time to reflect on your major take-aways. In at least a 250 word post, share with the class what you thought were the most eye-opening, interesting, or otherwise like-able parts of the book. In addition, discuss how the book influenced your view regarding the role of aquaculture and wild-capture fisheries as part of the solution for feeding the ~8 billion people on Earth.

On 10/18/22 I talked through a few study topics in class that Zoom friends didn’t hear well. Here they are in writing:

Question 1: Everyone got this!

Question 3: One: exponential growth. Two: like a J. Three: resource limitations – run out of space, out of food.

Question 4: Full credit for any idea and any way to test it. Ideally I was going for food web dynamics shaping pool ecosystems and/or habitat limitations tested with reciprocal transplant experiment: Put fishes/mollusks in and take fishes/mollusks out of pools with/without fishes/mollusks.

Question 5: In this question I was looking for you to show me that you understood the PROCESS that gives rise to adaptive evolution is natural selection. Although your answers varied, I gave full credit when I saw evidence that you could break down natural selection into its three premises. Note: there is no order, just wanted to see that you had the pieces clear. Specifically, I was looking for language that showed you understood:

Premise1: there is some competition for limited resources.

Premise 2: some individuals have traits that increase their survival and reproduce while others that do not have those traits and do not reproduce (or reproduce at a lower rate of success)

Premise 3: if the traits that convey an advantage have heritable (i.e. genetic) linkages then there will be evolution and adaptation to local conditions.

With the first quiz done and the midterm looming on the horizon (Thursday the 20th) it is time to think about studying habits and strategies.

In this post of no less than 250 words, share your strategy for studying for the quiz- what worked and what didn’t, and share what your studying plan is for the mid-term. This is a chance to learn from each other and light a fire under you to get ready for the midterm. All the material from the first lecture through lectures on October 11 and 13 are fair game for the exam. Again, it will be open book and note.

After reading Greenberg’s chapters on salmon and sea bass has your perspective on fish cultivation or capture fishing changed?
In a post of at least 250 words, share your thoughts on farmed vs. wild fish for the consumer table. Does it matter if the world eats farmed or wild fish? What do you think ‘sustainable’ means for the present and the future?

Share your thoughts in at least 250 words by the 27th of September, and by the next day weigh in on at least two posts by your peers.

After finishing the opening section on salmon in Four Fish it is time to do some reflecting. In your post of at least 250 words, share you thoughts on what the chapter suggested regarding our goals in managing salmon? What are our objectives? What would be lost if salmon in nature disappeared and salmon only existed as Salmo domesticus?

Are we working to just sustain food security the ability to fill our bellies, or something else as well?

Submit your comment by 11:59pm on Tuesday night and by Wednesday contribute to the discussion online by responding to at least 2 other posts.