The Alaska Chapter of the American Fisheries Society is pleased to announce the 2021 Molly Ahlgren Scholarship. There is $5,000 available to be awarded as either one or two Scholarships which will be determined by the qualifications of the applicants. The maximum Scholarship amount would be $5,000 with the minimum amount being $2,000. The Scholarship will be provided for the 2021 Spring semester to qualifying undergraduate students pursuing a baccalaureate degree in fisheries, aquatic, or biological science at the University of Alaska System (UA) or Alaska Pacific University (APU). Only junior level undergraduate students will be considered based on accumulation of credits as determined by UA or APU academic criteria and in good academic standing with UA or APU. All travel and meeting registration expenses will be paid for by the Alaska Chapter to attend the annual Alaska Chapter Conference in Homer, Alaska from 22–25 March 2021 <http://www.afs-alaska.org> (contingent on SARS-CoV-2 health and safety thresholds). The firm submission deadline (receive by date) for the application is 5:00 p.m. Alaska Time, Friday, 13 November 2020.

Greenberg found that the past of the Yupik people and wild salmon have been intertwined, so it stands to reason that their futures would be similar as well. He learned that the wild salmon population, not only in Alaska but everywhere that they are found, has decreased significantly and has been harmed, and continues to be harmed, by the fishing industry in the modern world. Unfortunately, the Yupik people have a heavy reliance on salmon as part of their lives – from ways to earn money to practices and traditions that are essential to their culture. Therefore, Greenberg makes the deduction that as the future of the wild salmon looks dimmer and dimmer, so does the future for the Yupik people. Greenberg points out that they have some of the highest rates of suicide in the United States. So, the Yupik people are clearly not supported by the rest of the country. They are in danger of losing their people, their ability to sustain themselves, and their culture. I do agree with Greenberg’s claim that the futures are parallel to each other. Society today has made it impossible to maintain healthy levels of wild salmon populations around the world and has created situations that not only decrease the number of wild salmon, but also damage their genetic diversity and the unique and strong DNA that took thousands of years to evolve within these fish. Salmon are and always have been a crucial part of Yupik life, so it’s clear that if the salmon are doing poorly, it is yet another reason for the same to be true of the Yupik people.

Greenberg was exposed to a lot of the harsh realities of Yupik life, including the high suicide rate and relative scarcity of fish. It seems that while the wild salmon were doing well, so were the Yupik people, as their culture emphasizes their connectedness to nature. Salmon is their main source of food, and many of their practices and habits revolve around the health of the salmon at the time. As the salmon numbers drop, so does their opportunity to practice their culture. Now, salmon are valuable enough that they sell the good ones, receiving packaged meat in return. This is a big change from what it used to be. Greenberg also heard about the high suicide rate in the area, and probably connected that negativity with the conclusion that the Yupik people have a very different position now than they used to. He is probably thinking that as the salmon numbers continue to decline, the Yupik people will be forced to lose even more of their culture and identity, so their futures are as entwined as their past has been.

In this chapter, I think Greenberg meant that Yupik people were going in the same direction as the wild salmon. Parallel meaning that they are both interconnected, and that they both rely on each other.  As they also have an affect on each other, good and bad. Just like mammals, the Yupik people rely on salmon as a main food source as they have for 10,000 years. As Greenberg mentioned, ” Yearly stocking may become as imperative for their survival as food stamps are to the Yupik.” Meaning without any sort of outside management, the population of future wild salmon could vanish forever. I agree that there needs to be certain regulations in place, to prevent a mass irruption in the species. I agree to a certain extent, because like it says in the passage, “There is no real certain way  to test to see if we’ve gone too far. ” The only way would be to stop stocking Alaskan rivers, and then see what happens, but even that is detrimental. It is detrimental if the “wild” Alaskan runs disappear after we interfere by not stocking the rivers. I think Greenberg will learn a lot more as he goes into his investigation and does more research, but I think as far as where his head is at right now, that hes definitely not wrong. The Yupik people definitely pose a great impact on the Wild salmon, as salmon do in return. So, yes I would say that they are very parallel to each other, because the future is dependent upon them both.

In the chapter on Salmon, the author Paul Greenberg writes “I couldn’t help but think that in a way the future of wild salmon and the future of the Yupik people were somehow sadly parallel to each other.”

In a post of at least 250 words, discuss what you think Greenberg meant in this passage. Do you agree? Why or why not?

By 11:59 pm on Wednesday September 16, comment on at least two posts by your fellow students to set the stage for our in-class discussion.  I think it is going to be a good one! 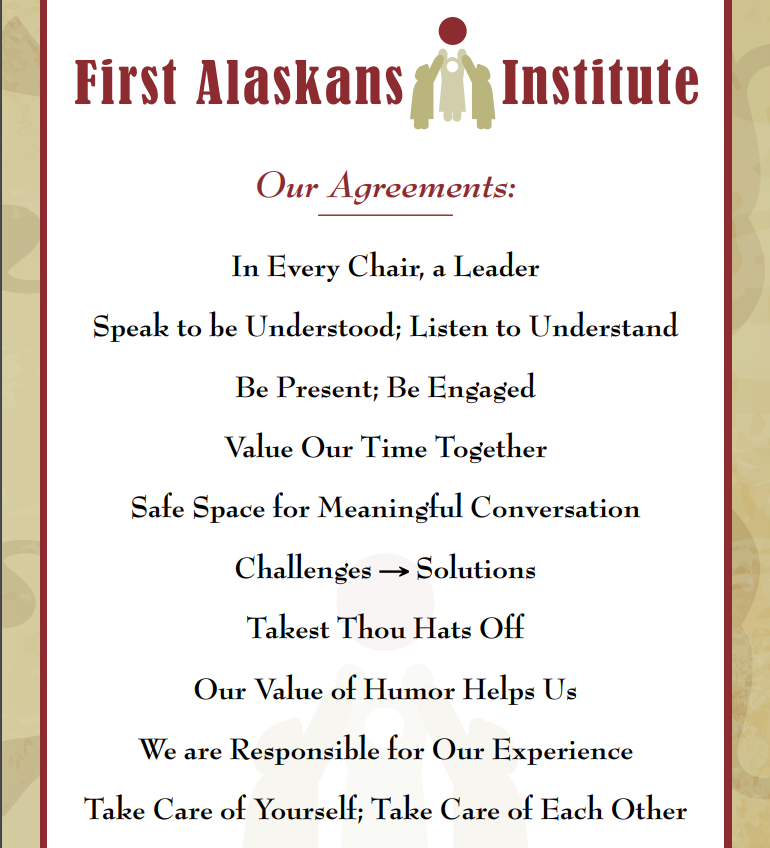 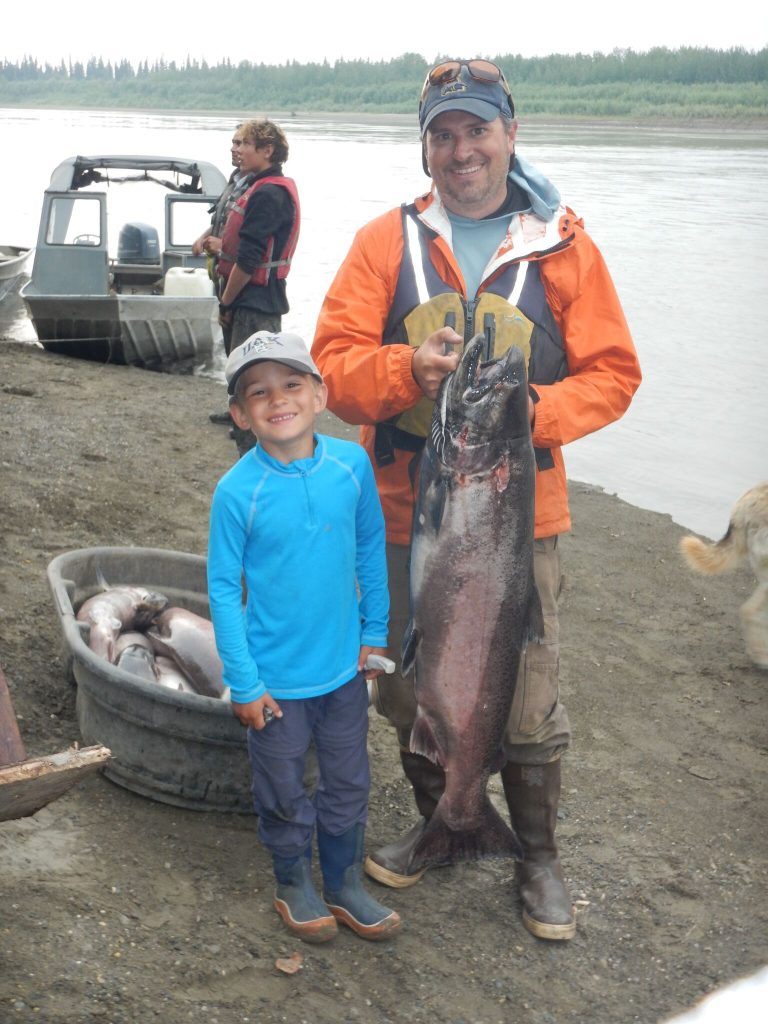 Here is a link to a recent news story based on some recent research findings of my group and collaborators.

This reporter got nearly everything right (which is rare talking to media).

Greenberg’s personal experience that set him on a journey to learn about fisheries stemmed from his love of fishing as a child, but became rooted when he returned to fishing as an adult.  During his childhood, he began fishing in ponds and lakes, but as the fish became depleted, he found himself moving into streams and rivers, and then into the ocean to increase his catch.  As an adult, he realized fishermen were having to go even further into the ocean to catch fish due to the continually decreasing schools along the shorelines.  In addition, he noticed four particular kinds of fish that were being sold in grocery stores.  That piqued his interest even more, causing him to learn about fisheries.

For me personally, I grew up fishing and still love it to this day. Living on an island where fish is plentiful and groceries are expensive, Sitka relies heavily on subsistence fishing. My first summer back after college, I was looking for a job and came across a “job for hire” ad for the Fish and Game Dept of AK. It was temporary, summertime work that required me to collect data and genetics from the code wires of tagged fish caught by commercial trollers. I love the job so much that I returned the following summer. Working for the Fish and Game for two summers gave me an insight on the importance of sustainability in our wildfish stocks. That led to my interest in working in the Fisheries industry.

I really like how Greenberg said “Four fish, then. Or rather four archetypes of fish flesh, which humanity is trying to master in one way or another, either through the management of a wild system, through the domestication and farming of individual species, or through the outright substitution of one species for another.” (pg. 11) and “but the fish we have chosen to tame are by and larger animals that satisfy whimsical gustatory predilections rather than the requirements of sound ecologically based husbandry.” (pg. 13).  At this point in the book, I think Greenberg sees the health of world fisheries as somewhat dire.  In need of help, but not necessarily to an extreme.  By the end of the book, I think Greenberg will be a little more concerned, given the state our stocks are in.  However, I also believe he will be optimistic that there is hope for recovery, since he has acknowledged the fact that fish stocks are capable of rebounding.

Thank you for a wonderful discussion today, the first of what I hope is many great dialogues.  My desire to do this Tuesday is part of a larger movement by professors across North America.Learn more https://academeblog.org/2020/09/02/scholar-strike/ 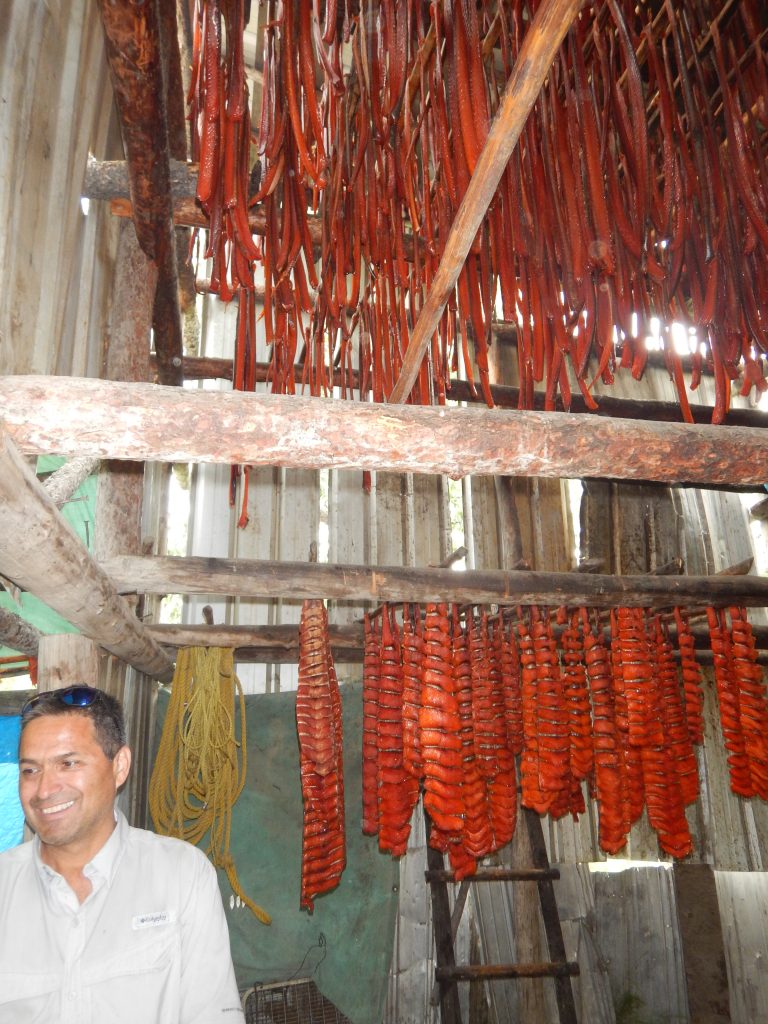 Image of my friend Ben Stevens in his smokehouse during 2017

For Tuesday, please come prepared to pick up where we left off in our discussion and I ask you read the following articles (in addition to the Scientific American article about why Malthus is still wrong)

After reading this introduction to the book and the general trend that the author suggested, I believe that at this point in the book he would have expressed deep concern for the worlds fisheries and global health. Growing up in Alaska I have several instances where I learned a plethora of things about fish and fisheries. I also had to grow to learn that all things are not what they seem unless you look at the bigger picture. In the summers I traveled and stayed with extended family in Michigan. Just like in the story, there was a pond by my aunts house, me and my cousins would spend every day out by the pond catching and releasing frogs. The window troughs to her basement were always full of frogs, you couldn’t go far without seeing at least a few frogs where ever you went in the area. I hadn’t realized that after all the years that there are no more frogs. My family owns a home next to my aunts house on a small river, and yet I haven’t seen frogs around the area in several years. Its always puzzled me as to what actually happened to all the frogs, I’m hoping to try to look into it more this semester. Although this isn’t a fishery, it had a huge impact on how I thought of the resources the world had to offer, they are far from infinite. By the end of the book I hope that the author will find some good news for the world but I highly doubt his ideas will change towards the decline in the global fisheries as a whole.